The choices below are delivered well, but they’re also well-written with a great setup and perfect payoff with just the right choice of words. To keep from having lines from the same films, or types of films, I’ve offered the best of nine different types of humor.

This parody often feels all too real when it comes to the frankly bizarre world of high fashion. The head of a modeling agency delivers a line about super-popular fashion designer Mugatu that almost sounds like it could come from a Project Runway outtake:

“Mugatu is so hot right now he could take a crap, wrap it in tinfoil, put a couple fish hooks on it, and sell it to Queen Elizabeth as earrings.” 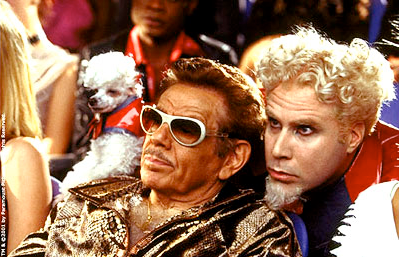 Now, it’s hard to find stuff that manages to be as offensively funny as South Park, and the movie really ups the game. This is a show, after all, where one character is so consistently anti-Semitic that when a teacher admonishes him, “Eric, did you just say the F-word?” the kid replies in confusion, “Jew?”

But it’s the teacher himself, Mr. Garrison who delivers the most offensive and hilarious line of the day. After saying something about women being cranky because they’re on their periods, one of his students admonishes him that this is sexist. His response:

“I’m Sorry, Wendy, but I don’t trust anything that bleeds for five days and doesn’t die.”

In a movie where actors play parodies of themselves (sometimes a little too well), the biggest laughs come from the unblinking delivery of selfish, self-involved, self-centered, self-promotion, with occasional notes of self-righteousness. Just before very sweetly asking the Almighty to kill someone he doesn’t like, Jonah Hill looks up to the Lord and murmurs:

“Dear God, I’d like to pray to you for a second. It’s me, Jonah Hill … from Moneyball.”

6. Exasperation, Dr. Strangelove or: How I Learned to Stop Worrying and Love the Bomb (1964)

Not a single person responsible for the destruction of the world will own up to it, from a US president who chides the Soviet leader that he’s just as upset about the whole thing as his counterpart, to the way no one will acknowledge that the top scientist in the room used to work for Hitler, the Apocalypse is brought on by a ring of paranoid buck-passers intent on acting like the situation is inevitably out of their control. (Sound familiar?)

This all hits its peak when the president finally calls his top general to account, pointing out that, despite all the general’s arguments to the contrary, a psychotic has overtaken the nuclear launch protocol. The general responds:

“Well, I, uh, don’t think it’s quite fair to condemn a whole program because of a single slip-up, sir.”

Arguably the best movie parody of all time, the film throws constant ironic, fourth-wall-breaking reminders that the story on screen is being shown through the lens of a hundred years of history. Racism in particular is shown to be not just appalling, but ridiculous as smart black men are not only mistreated but completely beyond the understanding of (some) powerful, stupid, morally absent white men. This only works because of this duality in perspective: the America of the 1970s looking at the America of the late 1800s with both affection and incredulity.

At one point, the black sheriff disguises himself as a Candygram delivery boy (another black stereotype) to deliver a hidden bomb to a thuggish cowpoke (Mongo) hired to kill him. After the explosion works, the sheriff admits:

“Mongo was easy. The b**** was inventing the Candygram.”

In one of the best comedic scenes of all time, Steve Martin suddenly realizes half of his body is now being controlled by the spirit of Lily Tomlin. As people hurry past him on the sidewalk, Martin’s body fights itself as he loudly announces that he’s not sharing his body with anyone. A guy in a hard hat gets to deliver the slam:

Another parody, this time of the sci-fi genre, has the actors of a canceled-now-cult-hit TV show squeezing out a meager living from convention appearances and promotional events. The “Spock/Nimoy” character (Dane) is constantly prodded to deliver his signature line, “By Grabthar’s hammer, by the suns of Worvan, you shall be avenged,” which he has come to despise.

At the character’s lowest point, they stand in costume before the grand opening of an electronics store giving out promotional one-liners with their best fake enthusiasm. When it’s Dane’s turn, he sighs, rolls his eyes, and manages to mutter:

“By Grabthar’s Hammer … what a savings.”

Everyone thinks of bittersweet romance in this classic, but it’s really the incredibly funny bits that make it so rewatchable. When Captain Renault is ordered by the Nazis to close down Rick’s bar/casino, he objects that he has no reason to do so. When ordered to find one, he throws a fit about being “shocked” to find out gambling is occurring on the premises. When a croupier then hands him his winnings, without missing a beat, Renault puts on a gracious smile and says:

Oh, thank you very much!”

God appears in the Heavens to give King Arthur and his knights a quest—wait, first he wants them to stop bowing and averting their eyes. It’s like the Psalms, they’re so depressing. He’s here to give Arthur and his men a quest to serve as an example in these darks times. Arthur exclaims in amazement that this is a good idea. God shouts down at him: