Dr. Paul Hernandez is one of the country’s greatest, most respected, dedicated and inspiring college professors. I’m [Dr. Marc D. Baldwin, Owner of Edit911] truly honored to be working with him to edit and polish what will be a bestselling, highly influential book The Pedagogy of Real Talk. He has attained such stature that he won the 2012 NEA Reg Weaver Human & Civil Rights Award.

About his experience working with the Edit911 Staff and me, Paul says: “I am so happy with your editing services, Marc, as you a true professional. I look forward to a long term working relationship with your company. You are a big part of the success of the book and I just want you to know I will sing your praises when it is all said and done to everyone I know.  🙂 Your support is a wonderful thing, my friend.  Of course, if there is anything I can ever be of service for please do not hesitate to ask.”

The following is reprinted from the NEA’s website, Classroom Superheroes: 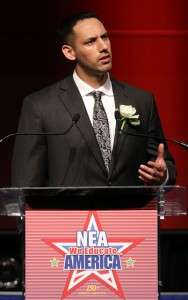 Paul Hernandez is not your typical college professor. See: Tattoos. Hear: His story. Hernandez, an assistant professor at Central Michigan University, grew up in poverty in Los Angeles – real poverty, the eating out of garbage cans and sleeping in cars kind of poverty.

“I was born and raised in deep poverty,” he says, by a single mother who came to the United States from Central America and struggled to earn more than $5,000 a year.

School should have been a haven. But it wasn’t. “School was, unfortunately, more of a punishment, in terms of what it felt like and was like,” Hernandez recalls. For one thing, it’s hard to focus when you’re hungry. For another, far too many of his teachers looked past Hernandez, or through him. Maybe he had “potential,” as some said, but most never tried to tap it.

“In eighth grade, I remember my grades: F, F, F, F, F – with 60 absences. I pretty much just stopped going to school…and no, nobody came looking for me,” he said. “Being a deviant kid, being involved in so many things, being in trouble all the time, it just didn’t allow for success in school.”

For most kids, the story ends there: jail or death.

But Hernandez recalls a dawning realization as a teenager that brought him, stumbling over his words, to the registrar’s desk at the local community college. It was this: He realized that everybody who held power had an education. “Walking in there, it was scary. And it was humiliating – because the questions I asked were so preposterous to them. They couldn’t help but chuckle when I said, ‘Hey, I want to go here.’”

But he persevered, hiding his textbooks from his gang family. And eventually, with the help of a California State University, Los Angeles mentor and the hope that he would eventually make a difference in the lives of kids just like him, Hernandez went on to earn a Ph.D. in sociology from Michigan State University, specializing in race in education.

Along the way, as part of his dissertation, Hernandez developed “Real Talk “ an alternative pedagogy that any teacher can use to connect with their students. “You know students don’t think of teachers as people like them,” says Hernandez – but when they do, when they make that personal connection, it lays the foundation for connections to the curriculum.

Hernandez, who is also a contributor to NEA’s journal Thought and Action, also has modeled a “College 101” program that helps at-risk high school sophomores to see themselves as college students. 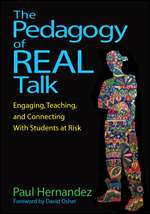 Share this:
in Featured Clients  by Marc Baldwin 17 Oct 2013 0 comments